Each year 4 in 100 hospital patients acquire an infection related directly to their hospital stay, known as a Hospital/Healthcare-Acquired Infection (HAI).  These HAIs may be caused by any number of pathogens; viral, fungal or bacterial.  One of the most fatal of HAIs is an infection caused by Legionella, namely Legionnaires’ Disease, which is found in water.  It is estimated that 33% of HAIs are from water, which is why a comprehensive water management plan is critical to keep patients safe. 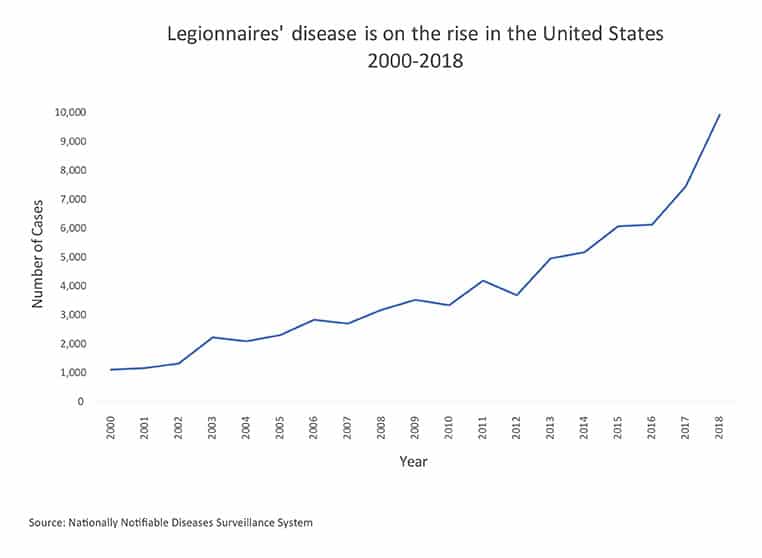 One of the biggest concerns in a health care environment is that the warm water can be aerosolized, such as in water cooling towers, showers and water fountains.  Other potable water functions in a health care environment where warm water temperatures may lead to Legionella bacteria formation include water used for sanitation, heating, ventilation, air conditioning, laundry, food services, ice production, bathing, physiotherapy, pools, cleaning medical devices and lab procedures.  Also, decorative environmental water features such as waterfalls and fountains may have water temperatures optimal for the formation, growth, and transmission of Legionella bacteria.  Patient exposure to Legionella bacteria-contaminated water may lead to Legionnaires’ Disease.

This high fatality rate of healthcare-associated Legionnaires’ Disease sheds light on the importance of case prevention activities including the implementation of effective water management programs.